Faith is a tough thing, people sometimes confuse it with belief or hope, but those both are full of doubt!

However, when one moves past the obfuscation of doubt, always, always the truth is there and it never changes: All is well.

Faith is understanding this truth and having faith in the fact that it is so.

When we recognize it and accept it, though, we KNOW it, and then it's our own and it changes the way we live; the way we feel from moment to moment.

It's hard to let go of doubt, but, there's a deeper reality and it's worth the fight to move past the doubt (which is based on fear) to get to the good stuff of life.

How nice to know that it's always within us, so, even if we don't accept it or recognize it -- it's still there!  That's love for you: eternal and constant, and constantly there for you no matter what.

Enjoy the musical feature below & be reminded on the power of prayer, too! :)

(As the culture continues on its current track, things like anger, violence & swearing become "commonplace" -- but they're certainly not good for you!  These are habits that can easily creep in and soon you're behaving in ways beneath you.  They may be "accepted," but, if you're intelligent enough to accept that you're better, you'll keep striving toward a spiritual ideal: which is honoring the real you.) 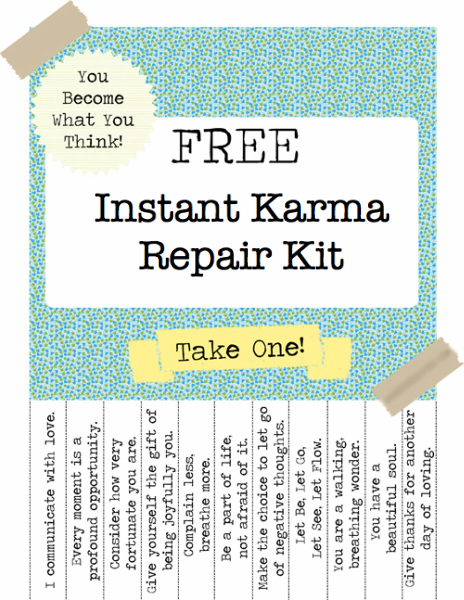 Doing the right thing isn't always easy, in fact: it's usually pretty hard.  Good news is: it gets easier!  (Until you have to face something else and then it gets pretty hard again.)

But, hey!  That's the miracle and challenge of it all!  We grow and expand and karma works for us to see to it that we do so!  It's better, though, to create as much good and positive karma as you can because life is hard enough already -- YOU DON'T WANT TO ADD TO IT.

When we make a mess out of life, that is, every time we are motivated by something less than noble and bereft of love, we're going to have to clean it up eventually.  Karma, like our lives, is a lot more complicated than we think, and it's not just "tit for tat" as some believe.

Every now and then we'll make a suggestion for some serious Karma repair.  If you're not quite ready to go for it yet, then just take a strip 'from the right' and start with that!  It's never too late to start, but, like so many things and -- especially karma -- the sooner the better!

If you're here and like what you see then...

You are part of a family.

We hate to clutter your mailbox, but, if you want
an e-minder to visit our Church service,
we'll be happy to nag you.  ;)